See over 150 photos from 39th Daytime Emmy Awards, on Flickr.

Susan Lucci on the Red Carpet

Mingle Media TV and Red Carpet Report host, JJ Snyder, were invited to come out and cover the 39th Annual Daytime Emmy Awards at the Beverly Hilton, in Beverly Hills.

General Hospital was the big winner with Five Emmys while Live with Regis and Kelly got Best Entertainment Talk Show for the first-time. Heather Tom also made history by winning for Best Lead Actress after winning in both the Best Younger and Supporting Actress categories. One of our favorites, Dr. Oz, also won for Best Informative Talk Show.

The Daytime Entertainment Emmy® Awards has been honoring excellence in all fields of daytime Broadcast production for 38 years. The Emmy® is awarded in 68 categories, including acknowledgements for series, performers and all other technical and creative areas. The Daytime Entertainment Emmy Awards season culminates with a televised show that pays tribute to the exceptional work of daytime broadcasting’s elite.

The 39th Annual Daytime Entertainment Emmy Awards were broadcast LIVE! on HLN, Saturday, June 23rd at 5 PM Pacific, 8 PM Eastern. If you missed it you can watch the replay midnight tonight and again on Sunday at 8 p.m. and 10 p.m. ET. for more information please visit: www.HLNtv.com

Jack Hanna and Friend on the Red Carpet

Here is the list of Daytime Emmy Award Winners Presented at Tonight’s Event: 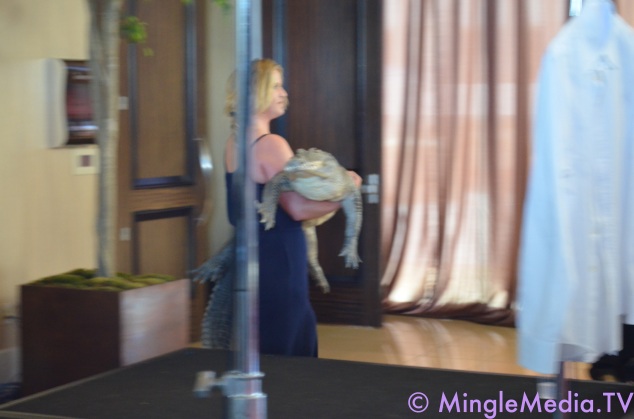 An Alligator – waiting to walk the red carpet!

Special thanks to PMK•BNC for inviting us.