Disney’s Sofia The First: Once Upon a Princess Premiere, a set on Flickr.

Mingle Media TV and Red Carpet Report host, Lee Allport, were invited to cover the television movie premiere of “Sofia The First: Once Upon a Princess” and the launch of the Sofia The First illustrated storybook on the lavender carpet at Walt Disney Studios Main Theatre.

Disney introduces a little girl princess named Sofia who (voiced by Ariel Winter) is an average girl whose life suddenly transforms when her mother, Queen Miranda (voiced by Sara Ramirez), marries the king and she becomes a princess. Sofia soon discovers that looking like a princess isn’t all that difficult, but displaying honesty, loyalty, courage, independence, compassion and grace is what makes one truly royal. Helping Sofia in her journey are the three headmistresses of Royal Prep Academy – Fauna, Flora and Merryweather (the beloved fairies seen in Disney’s classic “Sleeping Beauty”) and royal steward, Baileywick (voiced by Tim Gunn), as well as a group of cute woodland creatures led by wise-talking rabbit, Clover (voiced by Wayne Brady). The enchanting animated Disney Junior television movie for the whole family will air November 18 on Disney Channel and November 22 on Disney Junior. 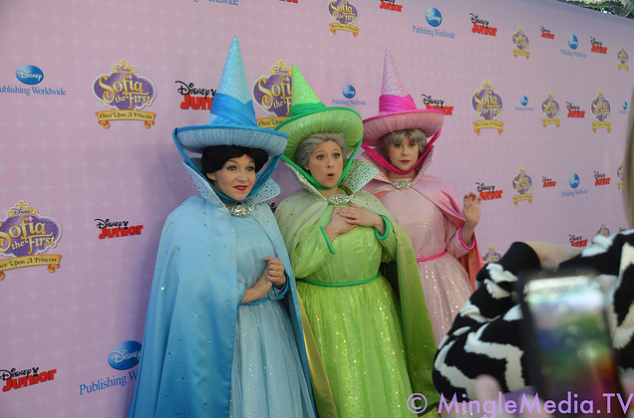 Disney’s Sofia The First: Once Upon a Princess Premiere

About the Disney Channel
Disney Channel is a 24-hour kid-driven, family inclusive television network that taps into the world of kids and families through original series and movies. Currently available on basic cable in over 99 million U.S. homes and to millions of other viewers on Disney Channels around the world, Disney Channel is part of the Disney/ABC Television Group. www.disneychannel.com.

Be sure to visit our Red Carpet Report site for all the details on who won this year including photos and interviews here at www.redcarpetreporttv.com.