2013 Angel Awards #ProjectAngelFood #PAF, a set of over 150 photos on Flickr.

Project Angel Food’s mission is to nourish the body and spirit of men, women and children affected by HIV/AIDS, Cancer and other life-threatening illnesses. Volunteers and staff cook and deliver free and nutritious meals prepared with love throughout Los Angeles County, acting out of a sense of urgency because hunger and illness do not wait. www.angelfood.org

It was lots of fun to be invited out for the Sex and the City 2 movie event at the Shangri-La Hotel in Santa Monica on Friday. The Henley Company and the Party Goddess really rolled out the pink carpet, and created an amazing event. Nothing better than to be invited as media and treated like royalty!

Around the fire at the Shangri-La Hotel Bar

There were well over two hundred women from the LA area here to participate and channel their inner Carrie, Miranda, Samantha or Charlotte… and to possibly win a fabulous pair of Christian Louboutin shoes. 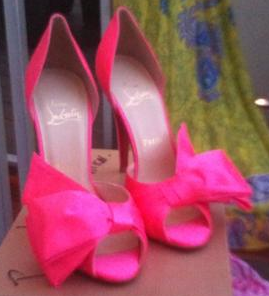 The hotel is right across from the Pacific Ocean and was a clear but cool night so the heat lamps around the pool area and the fire were very welcoming.

I met up with some of my other gal pals and we got our swag bags and headed into the theatre to watch “Sex and the City II” with a theatre full of women who were as giddy as school girls.

One has to wonder if the movie will be as good as the first or the series for that matter, but it was a chance to be out with other like-minded women who were looking for that evening of fantasy to look and feel as glamorous as the stars in the movie.

The opening was crazy with a wedding equipped with Liza Minnelli. She’s still got it. Now that women can sing “Single Ladies” and strut like no one!

The flow of the story line was not as crisp as could be and I personally thought that there was a lot of the movies left on the cutting room floor that could have made some of the scenes better. Then again, some of the dialog was not really great – including the line from Samantha when she walks into this incredible suite and sees the private bar and says ‘we can BELLY UP to the bar’ really? Wow, she sounded like a dock worker at that point… something I think was even too out of character for Samantha!!!

Desert Scene - Sex and the City 2

Don’t get me wrong… there was some amazing fashion and scenery including the men… but there were some things that were out of character for Samantha that (as I channel her) I thought were pretty lame. To top it all off, I was very offended by her lack of respect of the culture and the rules in a foreign country. It’s one thing to get bounced from your hotel for “kissing” and completely another to make a scene like Samantha did in the market where she and her gal pals could have been arrested and worse… ended up in prison for years before ever seeing the light of day. No worldly woman would ever do that – even when suffering from menopause (yes, I am in that phase as well, thanks to treatment for breast cancer).

All in all, it was an enjoyable movie – there was plenty of fashion and “ooh, pretty shiny objects” to keep our eyes glued to the screen to see what was next!! My gal pals agreed, not as good as the first, but then again, are they ever?? Still we had a wonderful evening out and fun time!!

Thanks so much to our hosts, we really did love being treated like celebrities for the evening!!!

In case you haven’t seen the trailer… here it is!