We all know that women do not dominate in the area of female directors, but did you know that there have only been fours (4) who have been nominated for an Oscar in 85 years?

We were excited to come out and cover the Red Carpet event for IRIS at the Kodak Theatre as well as be invited to come to a press preview of this new show a few days later.

At the Red Carpet event, we got to speak with Danny Elfman about the challenges he had with creating the music for IRIS:

We also spoke with the writer/director Philippe Decoufle – he talks about the journey over the past 3 years in developing this show:

Creating the show – it starts with music

Transforming the Kodak Theatre in Los Angeles for IRIS

Our Review of IRIS

There are 23 Cirque du Soleil shows around the world, i’ve seen seven of them (La Nouba, Mystere, Dralion, O, Criss Angel Believe, Kooza) and as of tonight, Iris, their newest show. Their shows are all awesome, by the very definition of the word, though to varying degrees. O, I saw in it’s 3rd year, and to this day I have never seen anything as monumental. The other shows I’d seen, all were second year and beyond, all very well greased machines, it was nice to finally see a freshman Cirque show like Iris, because there were still a few visible seams and loose strings here and there.

Tonight’s show, one of the trapeze artists missed a mark, and was stranded midair for a couple of beats, when she got back on her swing, she sat out for a little, leading me to think she had injured herself midair, but just then she rejoined the other aerialists for the rest of the routine. That was the most noticeable moment.

Other than a few shaky human pyramids, and a landing here or that that didn’t exactly Stick It. I knew there was no imminent danger for anyone, and when the spotters came out for a few of the more ambitious acrobatic feats, it was obvious that the performers were running at the edge, but weren’t 100% hitting their stride, that made Iris the most human Cirque show i’d ever seen. And I liked that.

Though some of the scenes felt too long. The running story was also left to the wayside a bit. The first half, I found myself analyzing the characters and their symbolism in ‘The World of Cinema’ and i had to stop, because i was obviously over thinking it.

The costumes were great, of two of the clowns, one reminded me of a young Steve Martin, dressed like a Matador in a Tuxedo, and another reminded me of Martin Short, just in a dance bit though. Though the clowns disappeared in the messy cacophonous numbers that the second act was full of, where everyone was on stage, huge choreographed dance numbers being upstaged by aerialists, I was sitting in the Mezzanine and didn’t know where to look. This works well for Believe, but the key to a Magic show is misdirection, which was an unfortunate side effect for Iris. Misdirection. The show progresses from the early days of cinema, with the props evolving, too subtly. But the tone changes with the show as well. Like the trapeze artist, the show missed a mark.

But after a few weeks of notes, i have no doubt that everyone will find and maintain their footing. I’d like to see the show again in six months to see how it progressed, as it was obviously still finding itself.

For More Information and to Get Your Tickets – Click Here

More About IRIS: A JOURNEY THROUGH THE WORLD OF CINEMA

Previews begin July 2011 for IRIS A Journey through the World of Cinema(™), the first permanent production from Cirque du Soleil® in Los Angeles and taking up residence exclusively at the world-renowned Kodak Theatre at Hollywood & Highland Center.

IRIS is a lyrical, fanciful, kinetic foray through the world of cinema bringing together dance, acrobatics, live video, and filmed sequences and takes spectators on a fantastic voyage through the history of cinema and its genres.

IRIS is written and directed by French director-choreographer Philippe Decouflé, whose credits include opening and closing ceremonies of the 1992 Winter Olympics in Albertville. IRIS features music by Grammy® and Emmy Award® winner and Academy Award® nominee Danny Elfman.

We’re excited to be covering the D23 Ultimate Disney Fan Expo – here are some photos and videos from the past two days in Anaheim. D23 guests got to see first hand – the creative teams and stars of some of  the upcoming films that Disney has planned for release in the coming year.

Sold Out Crowds on Saturday at D23

A Big Hit today – Marvel Comics Cast of the Avengers!

Marvel’s president of Production Kevin Feige joined some of the top names in film on Saturday, August 20 at 10:30 a.m. at the Walt Disney Studios panel to discuss Marvel Studios’ plans for 2012, including the hotly anticipated Marvel’s The Avengers! 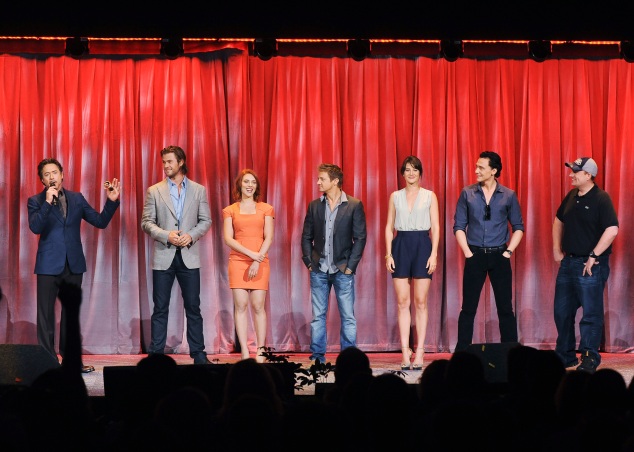 John Lasseter (chief creative officer, Pixar and Walt Disney Animation Studios) and other key creative figures responsible for twenty-five years of moviemaking magic and 12 heartwarming and groundbreaking films at Pixar were at D23 to talk about past and future projects.

Disney’s Wreck-It Ralph
Director Rich Moore welcomed Jack McBrayer and Sarah Silverman on stage where the D23 audience was the first to see the opening sequence from the movie.

Disney•Pixar’s Brave
Filmmakers Mark Andrews and Katherine Sarafian were joined by actors Kelly Macdonald and Kevin McKidd to present footage from the film.

Disney•Pixar’s Monsters University
In a special surprise appearance, Billy Crystal, flanked by Mike Wazowski and Sulley, joined director Dan Scanlon to discuss the film and show some behind-the-scenes making of the film. 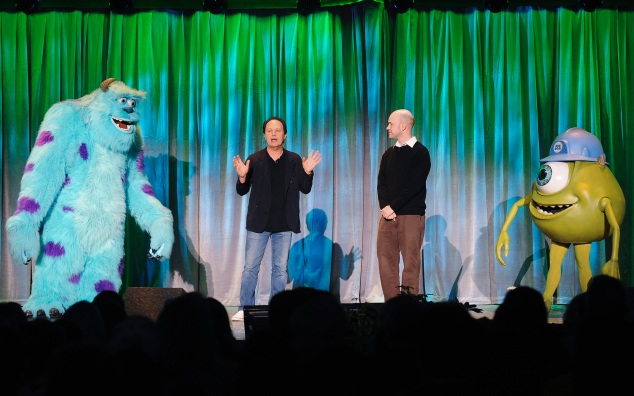 Tim Burton’s Frankenweenie
Producers Don Hahn and Allison Abbate gave fans a sneak peek at what’s to come in next year’s film, including a demonstration on how these fascinating characters come to life through stop-motion animation.

The Odd Life of Timothy Green
The film’s star Jennifer Garner was on hand to talk about the inspiring, magical film and her experience making the movie.

What’s a good story without some conflict? Imagine traveling to Paris with your daughters… while you are in the throws of menopause and your daughters are experiencing their own hormonal changes from puberty to pregnancy?

This new original web series is created by Alexis Niki and shot entirely in Paris. Mingle Media TV is excited to be airing this on our network and hope that the support of our women, mothers and sisters appreciate this comedic yet touching story as it unfolds in Paris.

“My Bitchy Witchy Paris Vacation” shares the story of a mother going through menopause and travels to Paris with her two daughters who are going through hormonal changes of their own.

Imagine traveling abroad with your daughters (15-year-old in the throes of puberty, and a 24-year old pregnant with her first child) and their bickering as sisters do, while you are going through hot flashes and your own emotional crisis?

You’ll love how the culture and hormones collide in this true-to-life adventure both sweet, sometimes painful, as it explores the humorous side of mother-daughter relationships, the bonds of sisterhood, and the anxiety stirred by life’s major transitions.