Mingle Media TV and host Kristyn Burtt were invited to come out and cover the GBK, BOP and TIGER BEAT Celebrity Gift Lounge in Honor of the 2012 Kids’ Choice Awards Nominees and Presenters and a birthday bash supporting the American Cancer Society and cancer survivors everywhere.

As always, giving charities an opportunity to share their cause and draw attention to the work they are doing is a major focus with GBK Gift Lounge’s. The GBK, BOP & Tiger Beat Gift Lounge will also support the following charities:

The American Cancer Society – with more than three million volunteers they fight for every birthday threatened by every cancer in every community. As the nation’s largest non-governmental investor in cancer research, contributing about $3.4 billion, we turn what we know about cancer into what we do. As a result, about 11 million people in America who have had cancer and countless more who have avoided it will be celebrating birthdays this year. 1-800-227-2345 or www.cancer.org.

ABOUT GBK
GBK, formerly GBK Productions, is a luxury lifestyle gifting and special events company, specializing in entertainment marketing integration. Formed in 2000 by Gavin Keilly, the company’s Founder and CEO. Widely known in the entertainment industry for bringing that little extra something into the Gifting Lounge environment, GBK offers its clients a full range of marketing services. For more info please visit: www.gbkproductions.com.

Who ever thought that Glenn Beck’s live streaming video network would have a Reality show on it? Well, it’s true, debuting tonight, “Independence U.S.A” with the Belcastro Family who are preparing for an independent life off the grid.

This show is a co-production between GBTV and the WorkShop, LLC who has also produced shows for other networks such as the History Channel, ESPN, HGTV, Travel Channel, Discovery Channel, TLC and others.

In the tonight’s premiere “A Hunting We Will Go”- we meet the Belcastro’s as they set out on a journey to be a self-sufficient family. The first lesson: Frank wants the family to be able to hunt and kill their own food but not everyone is on board. Frank and his son Adam learn appreciation for the hunt and start by trying to make their own weapons. Do you think they will succeed? 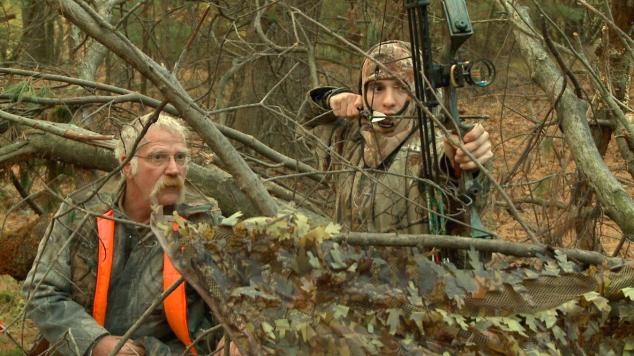 Frank and Adam Hunting on GBTV

Learn More About The Belcastro Family:

Frank Belcastro
“The Man with the Plan”
A carpenter by trade, Frank’s not afraid to experiment in order to get his family one step closer to self-sufficiency but will he succeed? No idea is too big for Frank and he always sees them through. His family doesn’t always agree with him, but they’re always on his side.

Kim Belcastro
“The Skeptic”
Reluctant to accept change and always afraid of what she’s going to come home and find, Kim is always there to question Frank’s ideas. Afterall, it’s her house too and when you bring Frank’s ideas to life anything can happen!

Adam Belcastro
“The Wingman”
The youngest of the family, Adam is a local fire chief and Frank’s right hand man. No matter how crazy Frank’s idea is Adam is ready and willing to try it. Together this Father-Son team is unstoppable.

Emma Belcastro
“The Realist”
Emma is so comfortable in modern society that she doesn’t always see the point in her dad’s plans. She is always there to give Frank a hard time but at the end of the day she believes he has their best interest at heart.

Founded in 2002, Mercury has a full time staff of over 100 employees and is based in New York, NY.

About The WorkShop, L.L.C.
The WorkShop, L.L.C. is an independently owned production company that specializes in creating high quality professional content. Whether The WorkShop is producing a broadcast television series or a broadband “webisode” series, each client is guaranteed to work with our award winning team of professionals. This multimedia service approach allows our client to choose the distribution platform for their project and have it executed in a way that best suits their consumers. The management team at The WorkShop has produced shows for The Golf Channel, History, ESPN, ESPN Classic, Animal Planet, HGTV, trutv, Travel Channel, Lifetime, Discovery Channel, TLC, and Broadcast Syndication.