ABC’s Trophy Wife and Back in the Game 2013 PaleyFestPreviews Fall TV #PaleyFest, a set on Flickr.

Mingle Media TV’s Red Carpet Report and host, Stephanie Pressman, were invited to come out to the PaleyFestPreviews: Fall TV – ABC’s Trophy Wife and Back in the Game with a Screening and Red Carpet at the Paley Center for Media in Beverly Hills.

Get the Story from the Red Carpet Report Team – follow us on Twitter and Facebook at:
• http://twitter.com/TheRedCarpetTV
• https://www.facebook.com/RedCarpetReportTV
• http://www.redcarpetreporttv.com
• http://www.youtube.com/MingleMediaTVNetwork
About Back in the Game: Series premiere Wednesday, Sept. 25 8:30/7:30 C
Batter up! Psych’s Maggie Lawson stars as a divorced single mother and former all-star softball player who moves in with her estranged father, Terry “The Cannon” Gannon Sr. (James Caan), a beer-swilling ex-baseball player. Father and daughter reconnect when they start coaching a Little League team together. The comedy comes from Las Vegas’ Mark and Robb Cullen, and also stars Ben Koldyke and Lenora Crichlow. http://abc.go.com/shows/back-in-the-game, https://www.facebook.com/BackInTheGameABC, https://twitter.com/BackInTheGameTV

About Trophy Wife Series premiere Tuesday, Sept 24 9:30/8:30 C
Malin Akerman is Kate, a reformed party girl who marries Brad (Bradley Whitford) after meeting him at a karaoke bar. He comes with a lot of baggage though: three manipulative kids and two ex-wives (Marcia Gay Harden and Michaela Watkins) who, suffice it to say, don’t approve of Kate. Shocking! http://abc.go.com/shows/trophy-wife, https://www.facebook.com/TrophyWifeABC, https://twitter.com/TrophyWifeABC

About PaleyFestPreviews: Fall TV
The 2013 PaleyFestPreviews: Fall TV, the Paley Center’s annual weeklong celebration of the fall television season, will feature interactive Q&A sessions with members of the cast and creative teams of participating shows, in addition to multiple premiere screenings in their entirety, with each night devoted to a single broadcast network. AOL will live stream the Q&A panels of the following upcoming fall series exclusively at http://www.Falltv.aol.com, giving audiences an insider look at: CBS’ We Are Men, The CW’s The Tomorrow People, FOX’s Brooklyn Nine-Nine, ABC’s Trophy Wife and Back in the Game, and NBC’s Ironside. Viewers can follow @PaleyCenter on Twitter and use #PaleyFest to join in the conversation. For more information, please visit http://www.paleycenter.org.

PaleyFest: The cast of “The Newsroom” Teases Season 2

Reblogged from the Red Carpet Report

PaleyFest continued Sunday night showcasing the cast of HBO’s “The Newsroom,” Aaron Sorkin’s latest work, at the Saban Theater for a 10 minute teasing clip of the season premiere followed by a question and answer panel from Aaron and the rest of the cast, moderated by CNN’s Piers Morgan.

Tease of the Season 2 Premiere

The premiere picks up right where it left off from Will being under investigation after calling The Tea Party the “American Taliban,” and he is now preparing for a deposition. Meanwhile, ACN has to deal with fact-checking errors and executive producer Mackenzie McHale (played by Emily Mortimer) smoothly solves the issue from a quick phone-recorded voice over. (I’ve never seen this done in a real newsroom- a recording over the phone would not sound as smooth and crisp as they made it to be, but hey, it’s movie magic.)

The 10 minute clip continued with the team dealing with switchboard failure and anchor Will McAvoy being completely unaware, jamming out to Rebecca Black.

From the teaser alone, Aaron is bringing “The Newsroom” back for season 2 with just the right amount of anticipation to keep you on the edge of your chairs, adding a bit more of a comedic element.

The cast took the stage for the questionnaire led by Big Foot’s favorite fan, Dev Patel, along with Olivia Munn dressed classy in a long-sleeve somewhat revealing white dress and Allison Pill with bouncy girls and a fun t-shirt and skirt.

Piers opened up the night by deeming “The Newsroom” as “incredibly realistic,” stating that Sorkin “hit the nail on the head,” which is quite a compliment coming from someone who has worked in the industry for years.

Daniels starts out the night by telling Piers that Sorkin “writes for actors” and produces “scenes you get to play and get your teeth into.” While the entire cast laughed about being able to improvise, Olivia Munn (“Sloan Sabbith”) admitted that Aaron’s ideas are always the ones that work best, and Daniels said they memorize the scripts “word for word.”

Sorkin admits that he wanted to create “historical fiction” within real news, and will continue to move forward in recent past events- that includes the elections, Trayvon Martin case, and he is still debating on covering the Connecticut shootings and Sandy Hook. Sorkin said they were very sensitive subjects and wouldn’t cover a story if it would minimize the actual event. Though, Piers encouraged covering Sandy, stating that he doesn’t see how the show could get away with not covering it.

Olivia Munn’s Opinions on Journalists and Sexy Vs. Smart

Olivia Munn was the only one who strongly expressed her views on journalism, majoring in broadcast journalism herself and working in the industry for a short stint. Munn said she didn’t believe that celebrity coverage was “real journalism” and didn’t think it was appropriate that “journalists make themselves too much a part of the story” and thinks opinions need to be left out of stories. She then looked over to Piers and said that she didn’t want to see “Piers Morgan” or “Diane Sawyer” on the red carpet, just on the news.

Munn later explained that women always have to deal with being sexy or smart, and that she wanted her character to represent both. Munn said she “didn’t want Sloan to flaunt her sexuality- but also not apologize for it.” And questioned why women have to “compartmentalize these qualities.

The Cast Really Enjoys Working With Each Other

Although John Gallagher Jr. (who plays “Jim Harper”) didn’t have much to say throughout the night, he was not quiet about his admiration for Sam Waterston (who plays “Charlie Skinner”) stating that working with Sam was like “getting a Ph.D. in acting,” saying, “Sam has routinely prove to be a master of subtlety and honesty.”

Meanwhile, Waterston credited Daniels, saying “We are all good, because Jeff is won-der-ful.”

What We Can Be Expecting

Sorkin told the audience that if they like “Sloan and Don” they will like Season 2. He also stated that eventually viewers are going to get sick of the cat-and-mouse game between Will and Mackenzie, and that the show will not go down if the two eventually get together.

For all those who haven’t given “The Newsroom” a shot:

One thing’s for sure, Sorkin said he is not concerned with the number of viewers watching the show, and more concerned with the current viewers continuing to like it. And feel like bashing Daniels? He doesn’t read reviews anyway!

Stay tuned for the Season 2 Premiere of “The Newsroom” coming out this summer, and if you’re not a news junkie, flip the channel from “Kim and Kourtney Take on Miami” and give yourself a show that actually challenges what’s going on in the world, and will actually teach you something.

Los Angeles Web Festival (LAWEBFEST) was created in 2010 by veteran Emmy-winning tv producer and NAACP Award-winning playwright Michael Ajakwe, Jr. LAWEBFEST is America’s first all-web series festival honoring independent filmmakers and celebrating web shows while bringing creators, producers, directors, actors and technicians together under one roof, in community, to network and exchange information with workshops and panels. This is the third year for the festival and they received an overwhelming 300 submissions this year and have moved the festival to the Radisson for better screening facilities and to accommodate the large crowds attending. In 2011, LAWEBFEST also partnered with Marseille Webfest, Europe’s first all-web series festival making them a powerhouse in web series world. Find out more www.LAWEBFEST.com or www.Facebook.com/LAWEBFEST.

Ms. Piche will be a panelist on Friday night and will be a moderator on Sunday afternoon.

About Mingle Media TV Network
MMTVN is an online media and interactive web TV network that executive produces, curates, and broadcasts 100 weekly web series shows along with entertainment industry event coverage. Our video coverage, web series and live broadcasts are promoted via Twitter, blog posts, Facebook and other popular social networks; in addition to airing live on the iPhone, Blackberry, and Android platforms and syndicated through Blip.TV and over 15 syndication sites including AOL Video, YouTube, Samsung, Vizio, MeeFeedia, Blinkx, Daily Motion, Boxee, Roku and as an iTunes podcast. Our audience reach online is over 250,000 weekly views of our video coverage, web series and live broadcasts and are currently in the top 20,000 websites in the US. MMTVN’s live web TV shows feature lifestyle subject matter experts and social media content providers from celebrities, authors to bloggers including executive producing two shows with Emmy award winners. MMTVN has expanded its curation of web series with a growing number of independently produced shows from science fiction to drama, action to teen soaps now playing on the network. In addition to curating produced webseries, MMTVN is promoting and securing sponsors for INDIE creators. MMTVN also covers Hollywood celebrity and charity events from the red carpet and behind the scenes. MMTVN has covered the Oscars on the Red Carpet along with Golden Globes, IPTVFest, HollyShorts, LA Shorts Fest, AOF Fest, Daytime Emmys, Saturn Awards, Streamy Awards, People’s Choice, NAACP, SAG , plus numerous Web Series Premieres and A-list Celebrity Fundraisers. Mingle Media TV is also sponsoring the Audience Choice Category in the New Media Film Festival for Web Series Creators. For more information, please visit http://www.minglemediatvnetwork.com.

We’d like to congratulate all of the nominees that were announced at this mornings 43rd NAACP Image Awards press conference in Beverly Hills at the Paley Center for Media. The nominees were announced by Vanessa Williams, Tracee Ellis Ross, Corey Reynolds, and Craig Robinson. 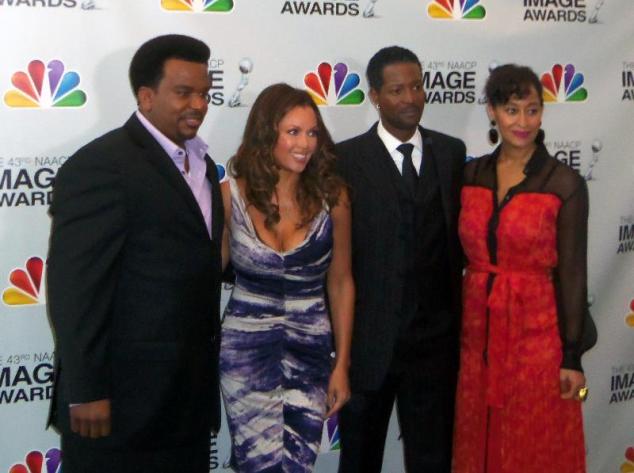 Please be sure to save the date for the live show on NBC where the winners will be announced during the two-hour star-studded event.

Outstanding Actress in a Comedy Series

Outstanding Actor in a Drama Series

Outstanding Actress in a Drama Series

Outstanding Performance in a Youth/ Children’s Program – (Series or Special)

Outstanding Actor in a Motion Picture

Outstanding Actress in a Motion Picture

Outstanding Writing in a Comedy Series

Outstanding Writing in a Dramatic Series

Outstanding Writing in a Motion Picture – (Theatrical or Television)

Outstanding Directing in a Comedy Series

Outstanding Directing in a Dramatic Series

Outstanding Directing in a Motion Picture – (Theatrical or Television)

Founded in 1909, the National Association for the Advancement of Colored People (NAACP) is the nation’s oldest and largest civil rights organization. The organization’s half-million adult and youth members throughout the United States and the world are the premier advocates for civil rights in their communities and monitor equal opportunity in the public and private sectors.