How many times have you seen this movie? I bet you even own it? Me too. Nothing however, stops us from watching it time after time (good thing DVDs can’t get dog-eared). So why should you take your family to the theatre to see this again… because this time, it’s in 3D.

Think of the fun the kids will have with the 3D glasses and seeing the action of the characters dancing and interacting. Imagine their little hands reaching out to touch them. Engaging them… Who knows, maybe it will keep them occupied so they forget about needing to have snacks or run to the bathroom?

What’s amazing to me about this is that   “Beauty and the Beast” was the first hand-drawn film to be dimensionalized into 3D… and that’s no easy feat AND Walt Disney Studios didn’t initially have plans to release “Beauty and the Beast” or “The Lion King” theatrically in 3D they were just going to offer it for home sales. So why now? They tested “The Lion King” in 3D as there was a gap in scheduling releases and it made $100 million – which confirmed that audiences wanted to see the 3D version.

Question – do you remember when it first was released?  Walt Disney Pictures’ 30th full-length animated feature, ”Beauty and the Beast,” premiered in 1991. That’s 20 years ago, and it will be a first-time experience for children going to see it in a theatre setting which makes the experience more fun.

Bonus playing with “Beauty and the Beast” – is the “Tangled Ever After” Short: “The Pursuit”

“Beauty and the Beast” was the fifth classic fairy tale to be adapted as a Disney animated feature. The tradition began in 1937 with “Snow White and the Seven Dwarfs,” which was based on the famous story by the Brothers Grimm. In the 1950s, Walt Disney and his animators successfully tackled two classic folk tales by French author Charles Perrault––”Cinderella” (1950) and “Sleeping Beauty” (1959). Another famous purveyor of fairy tales, Hans Christian Andersen, was the source of ”The Little Mermaid,” Disney’s 1989 release, which went on to become the Studio’s most successful animated feature up until that time.

Celebrity sightings at the premiere

Last Saturday the stars came out to the special screening of BEAUTY AND THE BEAST 3D – and to get their pictures taken with Belle and Beast at the El Capitan Theatre in Hollywood. 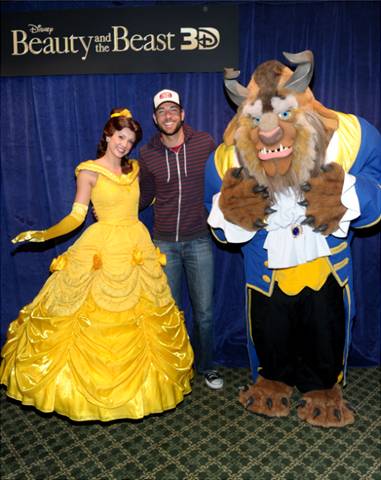 BEAUTY AND THE BEAST (In Disney Digital 3D™)

Walt Disney Animation Studios’ magical classic “Beauty and the Beast” returns to the big screen in Disney Digital 3D™, introducing a whole new generation to the Disney classic with stunning new 3D imagery. The film captures the fantastic journey of Belle (voice of Paige O’Hara), a bright and beautiful young woman who’s taken prisoner by a hideous beast (voice of Robby Benson) in his castle. Despite her precarious situation, Belle befriends the castle’s enchanted staff—a teapot, a candelabra and a mantel clock, among others—and ultimately learns to see beneath the Beast’s exterior to discover the heart and soul of a prince.

Featuring unforgettable music by Howard Ashman and Alan Menken, and an enormously talented vocal ensemble, “Beauty and the Beast” was the first animated feature to receive a Best Picture nomination from the Academy of Motion Picture Arts and Sciences.

Céline Dion/“Beauty and the Beast” 3D Disney’s beloved Belle, and the Beast from “Beauty and the Beast,” flank internationally acclaimed singing superstar Céline Dion (center, left) and her family (center left to right) Nelson, René-Charles, Eddy, and husband René Angélil, backstage at The Colosseum in Caesars Palace, Las Vegas, on the occasion of The Walt Disney Studios’ Academy Award®-nominated classic animated feature being released for the first time in 3D on January 13.