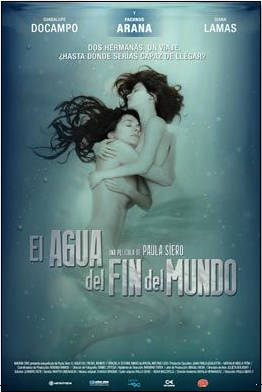 “The Water at the End of the World” (“El Agua Del Fin Del Mundo,” Argentina)

The Second Annual Latin American Film Showcase: Women on the Verge will be screening five films from August 12 – 18 at the Laemmle Sunset 5 in Los Angeles , CA., courtesy of Outsider Pictures. You’ll be able to view a series of five films representing outstanding work from one of the most exciting frontiers of contemporary world cinema: Latin America .

Produced, written, directed or edited by up-and-coming and established Latin American female filmmakers, these films celebrate and embrace traditional Latino sensibilities and values while also exploring the realities of  the human condition and  the conflict created when these cannot be reconciled.   At the core of each of these five films beats the heart of a woman:  a woman at a defining crossroads in life who is on the verge of transcending her current circumstance or making that false step that could send her into the abyss.

General admission is available for all five films or a special $30 showcase ticket may be purchased at the theater which gains admittance to all five of the Latin American Showcase films.

Exhausted divorced mother, Julieta is struggling to meet a critical work deadline while trying to put her two young energetic boys to bed.  When the youngest falls and is injured, Julieta rushes the child to hospital but as soon as she arrives, her life spirals further out of control as the staff question her treatment of the boys and investigate potential abuse.  As the story unfolds, the question of who to blame and who to believe becomes difficult to answer.  This minimalist third feature by director Anahi Berneri (“A Year Without Love”) is helmed with acuity and features a high-wire, carefully controlled performance by Erica Rivas as a woman on the verge of losing her children.

After the accidental death of their grandfather, amnesic and mute Marina is taken under wing by wheeler-dealer cousin Jairo (Julian Roman) as they decide to try to recover the land from which Marina was displaced years ago. As they travel from Bogotá to the Caribbean coast in an old beat-up Renault 4, the story of her traumatic past starts to unfold.   Writer-director Carlos Gaviria frames a ravishing landscape that hides a legacy of fear.

“Portraits in a Sea of Lies ” is a portrait of Colombia , a country where despite suffering an ongoing civil war for the past 60 years, Colombians see themselves as the happiest people in the world.

Everything changes for single mother Dalia (Ursula Pruneda) when she learns that her mother Lala (Ofelia Medina), a respected herbalist, has early-onset Alzheimer’s disease.  Lala asks her daughter to help her before she completely loses her mind and gives Dalia her latest research on plants and herbal remedies that according to Pre-Columbian, Mexican tradition cure the human soul. Dahlia thus begins a compelling journey into her mother’s mind and memories as well as into her own identity.  Sure-footed direction by leading Mexican filmmaker Maria Novaro eschews melodrama and creates a densely woven world of real domestic tensions and lifestyles.

“The Water at the End of the World” (“El Agua Del Fin Del Mundo,” Argentina)

Laura and Adriana are two sisters who live together and desire to take one final journey together after Adriana’s health begins to deteriorate from an inoperable condition.  With very little money on hand, Laura does everything possible to find the cash so that they can leave their impoverished neighborhood in Buenos Aires for Ushuaia, a place at the end of the world where Adriana wants to spend her last days.   A powerful, moving feature debut from actress Paula Siero offers a warm, intensely honest, and humane story of two sisters desperate to come to terms with one another before it’s too late.

Based on Gabriel García Márquez’s novel, this film is set in colonial South America during a time of superstition and fear. A rabid dog bites fiery, 13-year-old noble Sierva María (Eliza Triana). Fearing her to be possessed, the family imprisons her in a convent.  Father Delaura (Pablo Derqui), the passionate young protégé of the bishop, is sent to oversee her exorcism.  He alone understands the absurd cruelty of her plight, but his denunciation of her treatment is complicated by the chaste but forbidden love blossoming between them.  Costa Rican director Hilda Hidalgo’s debut feature is a masterful blend of understated performances infused with the dreamlike atmosphere of the Colombian novelist’s source material.

More information can be found at www.laemmle.com (for show times) and at www.outsiderpictures.us (for information regarding each film).