Striving to become pioneers in the online movie rental via Facebook, the Latin American independent studio Talleres Uchawi, has engineers several agreements with Facebook in order to bring “Lecciones Para Un Beso” (Lessons for a Kiss) to audiences in the U.S., Latin America & Colombia. This new model of distribution will set new standards for independent filmmakers worldwide. To watch the movie, fans will be able to pay with a credit card or through “Facebook credits.”

The cost to “rent” the movie through the social network will be one dollar and can be accessed by its Fan Page followers, currently totaling 165,141 users. Already the fans are beginning to participate in contests and promotions as the online premiere draws closer https://www.facebook.com/LPUBeso 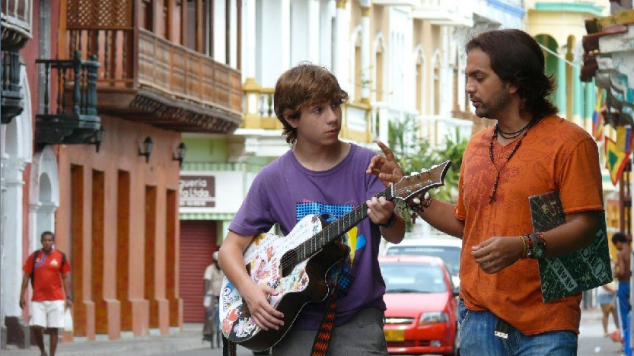 The film “Lecciones para un beso” from the young Colombian director Juan Pablo Bustamante is a romantic comedy that premiered in movie theaters in his native country and broke broke box office records. The film tells the story of Alejandro’s life, a teenager in Bogota who is forced to move to Cartagena where his mother decides to open a restaurant. There, he falls in love with María, a stunning young girl, and intends to try everything possible in order to give her a kiss. Inexperienced in love, Alejandro asks three clients in his mother’s restaurant for help — a romantic, a liar and a materialist — to teach him how to win María over. The men accept not only to help the boy, but they also make a bet among themselves to see whose advice ends in the kiss.

“Lecciones para un beso” is a story that for 100 minutes engages the audience in a plot that light-heartedly mixes romance, lies and money! The film was shot in over 20 locations in the historic district of the city of Cartagena de Indias, Colombia and received a grant for the ‘Cómo se Cuenta un Cuento’ [“How to Tell a Story”] workshop dictated by Gabriel García Márquez and Fernando León de Aranoa, at the International School of Film and Television in San Antonio de los Baños, Cuba.

Talleres Uchawi produces Colombian independent films dedicated to the creation of audiovisual works that combine artistic and commercial elements with quality universal stories. One of the documentaries shot ​​by this production house, Cartagena de Indias: Una historia de cinco elementos, won first prize at the Third Exhibition of New Artists at the 43rd Edition of the Cartagena Film Festival and has sold over twenty-five thousand copies.

For more information on the film, visit: